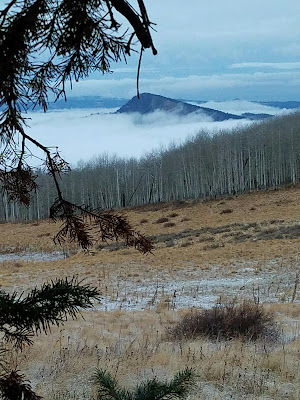 10 years.  Here I am, again.  Opening Day.  Same hunting unit, 3rd rifle season, same objective. Harvest an elk. This being my tenth season, there is a special feeling.  Persevering through the last decade in pursuit of the elusive wapiti gives me great satisfaction.

If I were a baseball player, 3-for-9 is a great batting average.  2-for 2 over the last two seasons? Even better!  Now the pressure is on to keep the streak going.

In hunting though, you realize the odds are stacked against you.  No matter.  The experiences, life lessons, laughter, sights and sounds make it all worthwhile.  A successful hunt?  That feeling is indescribable.

I am ready to give it a go and see if the hunting gods will bless me during season 10 of this journey.  I'm set up in "The Meadow" atop the Continental Divide ready and waiting for the elk to make an appearance.  Peaceful does not begin to explain the feeling when you are taking in the natural beauty this vantage point offers.

There is one big difference though on this Opening Day.  I'm sitting next to my son.  It is his first elk hunt.  I have been waiting for this moment for many years now.  There is so much I want to teach him.  So much I want to show him on this hunting trip.

I'm fairly certain he'll never forget his first trek up to "The Meadow."  Not for the nostalgic reasons that you think.  Suffice it to say, we had a bit of "land nav" difficulty. No excuses, just the fact this is the first time in my years of hunting this area where I didn't have the advantage of either snow, moonlight, or both, while heading into the black timber at 5:30 on a November morning.

After a couple of what I'll describe as short detours, we made it to "The Meadow" as daylight was getting ready to break.  He had been giving me some good-natured grief as we trudged up the mountain on those short detours and that continued as we were getting set up.  I giggled.  Lesson #1 for son on first elk hunt compliments of dear 'ol Dad...Check!

Sitting next to him, I think to myself the view is the same, the feel is different.  It is different because I am sharing it with my son.  It is a feeling of being above the clouds.
Posted by smrjg24 at 9:44 PM 1 comment:

So This Is Christmas

So this is Christmas and what have you done
Another year over, a new one just begun....John Lennon

The verse John sang so many years ago is timeless. I like to think everyone is always reflecting.  I realize they are not.  Being an introvert, I'm reflecting endlessly.  It doesn't make me better than those who don't, let alone perfect.  I only hope it makes me a better human.

So here we are.  Another year over.  What are you going to do in the year to come?  Given my line of work, I know there is much ugliness out there. With that, let me challenge you.  Do your part to stem the flow of ugliness.  It starts with positive thoughts.  Cheesy as it may sound, let me break it down for you into two simple things:


Your life is blessed many ways.  You just don't realize it.  Or maybe you do.  I only hope.

What's In A Name? - Noting the Passing of Pat Summitt

I'll be the first to admit, I am not a huge follower of Women's College Basketball.  My sister, on the other hand, is.  To boot, she has been a a Lady Vols fan for some time now.  As you can imagine, the news of Coach Summitt's passing is nothing she wanted to hear even though she knew it would be a reality one day.  Simply stated, "it sucks."

What I will say is I do have an appreciation for those who are masters of their craft, whatever that craft may be.  In the case of Coach Summitt, it is obvious what craft she mastered.  Take one look at her coaching career and the stats speak loudly and clearly.  She was one helluva coach.

Even though her birth name was not Summitt, I see an irony here.  Or was it all part of her destiny?  People generally aren't willing to work hard for you without the occasional "pat on the back."  Summit.  She not only brought herself to hers, she brought many others to theirs over the course of her life and career.  That is definitely a true measure of a person.  Can you bring people to achieve great things and to those things they don't believe they can achieve?

While the news is sad, rest assured the world is a better place for having Coach Pat Summitt leave her footprints on it.  Those footprints will continue to leave even more footprints for years to come.  And that, folks, is what life is all about.

Look Up.  Two words when put together seem so simple to understand.  That would appear to be an accurate statement however, it took me 40 plus years to realize the true meaning.

So here I am, in boot camp, two weeks  after graduating high school.  Marching, marching, marching.  The only place you look is directly at the back of the head of the airman who is marching in front of you. The goal in this scenario is a group moving as one.  Everyone knowing what each other is going to do at every step of the way. A rudimentary concept, yes.  Given what we were training for, it was understood that rudimentary concept could save your life one day.  That sets the tone.  Always focused, always driven.  Focused and driven towards the goal that has been set, no matter how big or how small.

Hindsight being what it is, it took me many years to transition to a mindset of a TRUE appreciation of, shall we say, the surroundings.  The surroundings when you are trying to reach a goal or simply understand  life.  Let me explain as best I can.

I have lived in Colorado since my late 20's.  That means I have the view of the Rocky Mountains at my disposal.  Disposal in the sense I can simply look up from almost anywhere I am at any given moment and see their beauty.  Sure, I would notice them from time to time when I first moved here.  True appreciation of them, not even close.

Fast forward to my mid 30's.  I felt the need to get back to nature and decided to start hunting elk in those same Rocky Mountains.  Motivated and now driven by a friend who has been hunting the elusive wapiti since he was a kid, I figured why not?  I never heard him chuckle outwardly as he agreed to let me tag along.  And now here I was, not knowing shit about shit when it comes to hunting elk and "hoofing it" at elevations between 8,500 and almost 10,000 feet above sea level.

Make no mistake, hunting is hunting at the very basic level.  The stark realization of it all comes when you begin to understand the game you are hunting varies widely in it's native terrain and behavior.  What that means is you are in for a ride.  He drug me all over those Rocky Mountains that first trip.  He had "to show the me the terrain," he said.  "You gotta go where they are", he said.  Cussing under my breath the whole way.  Nonetheless, I kept going because I wanted to experience everything I could.  Unforgiving terrain is what I experienced for the most part that hunt.

I experienced something else.  I didn't realize it until my second hunt though.  During the first hunt,  I was focused on following my hunting partner up and down those hills.  Getting my bearings and committing to memory the terrain.  Being the rookie, I didn't want to mess up his hunt.  He was sacrificing for me to learn the ropes.  (Something I'll be forever grateful for)   Come that second hunt, I was out on my own.  Wandering as I saw fit.  Trying to find the elk in their backyard.  Meandering aimlessly for a bit while trying to stay warm, (we hunt in November) I stopped...and looked up.  What I saw was amazing.  Simply standing out there, all by yourself, with almost nobody around for miles, soaking it all in.

I never realized just how important it is to not lose site of the true meaning behind those two simple words until that moment.  Look up.  If you don't, you may miss the beauty of wherever you call home  has to offer.  You may also miss the beauty your life is offering you.

Look up.  You never know what you'll see.

So this is Father's Day

Here it is, my 16th as a father.  I try to reflect on this day.  Reflect on times past, what has happened since the last one and looking ahead to the upcoming year until the next one is upon us.  Father's Day is unique for taking a moment or two throughout the day to let your mind wander in this way.  Unique because it is the middle of the year and summer is almost officially here.  Hard to believe.

This year I don't have to go back too far in the memory banks.  This past week alone has been both rewarding and sad.  My daughter recently got her driver's license and as of this week she now has her own vehicle.  Weird.  Scary.  Rewarding.  All apply here.  Weird in the sense that she is no longer strictly dependent upon me or her Mom for transportation.  Also weird is her running to the grocery store for me as we forgot one item for the favorite dinner of hers that I was making.  Scary.  Anyone who is a parent doesn't need this one explained when it comes to a child of theirs transitioning to this stage in their life.  Rewarding.  Very much so,  as I am witnessing her grow into a beautiful young woman.

As for the sad of the week.  Let's just say we are constantly reminded life is not a forever thing.  A good friend had to say goodbye to her beloved dog of 15 years.  My ex-wife's grandmother is in rapidly failing health.  In each case, the inevitable can be summed up in two words.  "It sucks."  That being said, I try to focus on the fact both lives were filled with love and joy.  The love and joy of family and friends.  That's what's important.

As for me, I'm looking ahead to this next year.  We'll see what comes out of this brain bucket of mine and makes its way into this blog.
Posted by smrjg24 at 7:14 PM No comments:

I have been entertaining the notion of writing in a more formal manner for some time now.  I, like many out there I'm sure, believe I have something to give to the masses.  The masses, yeah right.  Quite laughable really.  In actuality, I want to do this for me.  Nothing fancy, just a way to express myself.  You have to understand who I am.  I'm an introvert.  One of the things that comes with being an introvert is the blessing (and curse at times) of a brain that rarely shuts off.  Always thinking, always processing.  That means I suffer from too many thoughts and not enough storage space.  So began the notion of blogging.  I have been picking the brain of a friend (and fellow introvert) who is a published author.  He has given me some great advice already and I now find myself ready to "punch the keys!"  Let's see how it goes.
Posted by smrjg24 at 4:07 PM 2 comments: